All  About  Befana
Here are the items I have written about the Befana, the holiday on Jan. 6, which marks the official end
of the Christmas Season. There are 6 or 7 seven. They all start in similar fashion, but then go off on their own.
The single Befana graphic in each is the same. The hilarious Gary Larson cartoon (top right) is new.

This morning I noticed in the small coffee bar near my house “Christmas stockings” that just been put up as decorations. Then, I remembered that in most of Italy gift-giving time is far from over.

Long before Santa Claus, reindeer, fir trees, and snow started showing up on the unlikely slopes of Vesuvius, the traditional bringer of holiday gifts was the Befana, an old woman who brings gifts to good children (or lumps of coal to bad ones) on the evening before Epiphany, January 6. "Epiphany" is from Greek and means “to manifest” or “to show”. January 6 is the twelfth day after Christmas (I think that is the one with Pipers Piping or Drummers Drumming, but I don’t really recall and is the day on which Christians commemorate the manifestation of Christ, the Savior. It is when the Magi appeared and brought gifts. Depending on the legend, an old woman —either searching for her child (one of the “first–born” murdered by Herod) or having been invited to accompany the Magi—also appeared. Her name, in Italian—Befana—is a corruption of the word “Epiphany”. That word is in the Christian faith a feast day that celebrates the revelation of God incarnate as  Jesus Christ. In Western Christianity the feast marks  the visit of the Magi (the Thee Wise Men) to the Christ Child, and thus Jesus' physical manifestation on Earth. The word 'Epiphany' is from Greek epipháneia, meaning manifestation or appearance. It is derived from the verb phainein, meaning "to appear." In classical Greek it was also used, for example, for the appearance of dawn, of an enemy in war, but especially of a manifestation of a deity to a worshiper.

Without question, there is something much more peaceful and spiritual about January 6 than December 25. That is, no doubt, due to the commercial glitter of modern Christmas celebrations. At least in Naples, there is no such pitch as “only 15 more shopping days till Befana”. Not yet, anyway. So, the little stockings go up for the gifts, and the children wait.

“May the great time in you still greater be, while all the year is your Epiphany.” 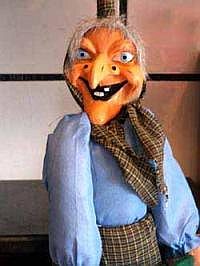 Today is Befana, the "Epiphany." It is the traditional end of the Christmas holiday season, the last of the Twelve Days of Christmas, the one, at least in the English, song, with "12 Somethings something"—or something. It is one of the two gift-giving days of the season (the other being Christmas morning) and, at least in parts of Italy, including Naples, just as important. Typically, the gift-giver is represented as a benevolent old crone. The shops along via San Gregorio Armeno that specialize in Christmas items such as Nativity scenes will start shutting down, although at least a few stay open to catch the last bit of holiday trade. Various entries in these pages having to do with the tradition of the presepe (Nativity scene) displays are (here) (here) and (here). One of the things that many visitors find amusing about some of the nativity displays is that they may contain very "non-Christmas-y" figurines; that is, while they show the Holy Family, the Three Wise Men and attendant heavenly hosts, shepherds and livestock, they may also display figurines of political figures. Thus, if you want to show your displeasure with the current mayor of Naples you can park him way out back behind the stable somewhere! There is less of that this year. Unsurprisingly, the new pope, Francis, is doing well in the displays.

In the old days, before the syncretistic spread of northern Christmas traditions, it was the gift-giving time of the season in southern Italy. Now, it's the second half of a twofer. And if you were born between Christmas and Befana and also have your name day in there somewhere, you either became one very spoiled child or a very disgruntled one when you got just one present for everything. Befana is always an old hag who leaves either a gift for the good child or a lump of coal for the bad one. For the record, Italians are not familiar with the looney English song that starts "On the first day of Christmas, my true love gave to me...", although I did get my Italian high-school students to sing it. They were very good at remembering the 'Lords a-leaping' and 'Geese a-laying' and very good at figuring how many gifts there were in all. The answer is not 78, by the way, because it isn't 1+2+3+4... etc. but really 1+(2+ 1)+(3 + 2 + 1)…etc. So we figured it was 364. One kid said, "What about the cows? The maids had to be a-milking something, right?

Today is the 12th day of Christmas. I was saying that my Italian Jr. High School students were very good at remembering the 'Twits a-tweeting' and 'Five MacBook Airs' and very good at figuring out how many gifts there were in all. The answer is not 78, by the way, because it isn't 1+2+3+4... etc. but really 1+(2+ 1)+(3 + 2 + 1)…etc. I was curious if there was a quick Gaussian way to figure it out so I got on Dreambook last night and got the Great One, himself,
Carl Friedrich Gauss.
"Karl, my main math man...here's the deal...what am I missing? That thing with 1+(2+1)...
He was way ahead of me. Not surprising. "You're missing that it's  a simple dreieckzahlserie.
"Huh?"
"You know, the sum of the first n positive integers. You're not too good with numbers. You want it with or without the cows?" How many days? Of course there's a quick way! Now, how many angels can fit on the head of a pin is another matter. That's a bit trickier, but...

A Nursery Rhyme for the Befana

Gifts to good children and lumps of coal to bad ones is no longer acceptable. These days, to stroke the self-images of the wee ones, it's gifts all around. I was sitting at a table outside the same coffee bar where I first found the befana image for these entries. Yesterday I learned about some nursery rhymes connected with this holiday.I was eavesdropping on a regular who usually talks quite audibly to himself —some of it very interesting. No one else was at his table. He didn't mind. He recited this:

[The Befana comes at night/ with her shoes in tatters (lit. 'all broken')/
with a Roman hat/ long live, long live the Befana.]


Then he giggled. "It's a nursery rhyme" he said. I asked around, thinking that everyone must know it. Not so. I found a few who knew the first two lines, but not much after that. And my poet friend, Giacomo, had never heard of it at all! “It's just a nursery rhyme,” he sniffed. (Really? Two of Italy's great modern poets, Giovanni Pascoli and Gabriele D'Annnuzio wrote poems about the Befana.) Perhaps the anonymous children's nursery rhymes (filastrocche) are the most fun. There are hundreds of variations on this particular rhyme. Lines 1, 2, and 4 are usually the same. Variations generally happen in line 3: for example, col cappello alla romana [with a Roman hat—no one really knows what that means*] or con le toppe alla sottana [with patches on her garments]. Giovanni Pascoli (1855-1912) is one of Giacomo's favorite poets, and Pascoli wrote:


I know—five lines. He's a poet. They're allowed to do that. “Just a nursery rhyme,” indeed. Hmmph. I challenged Giacomo to give me one third line, maybe like my own modest attempts: con la faccia della rana ["with the face of a frog"] or pur' mangiando la banana ["even eating a banana"] or pur' essendo non campana ["though not being from the Campania region of Italy," though that line also means "even though she's not a bell." Poetic license. ].

“C'mon, it's one lousy line!"
“I am not writing no third line for no poem about no Befana. Got that?”
“Three negatives. That means you are going to write one. Think of Pascoli. And D'Annunzio?
“Never heard of 'em.”

*But Selene Salvi has found a reference to "ramazotta" (a kind of cap or headgear, also known as a "Roman hat" in Vocabulario universale italiano, compiled by the Società tipografica Tramerer & Co. Napoli 1835. But no pictures!

Befana is a bit of linguistic sleight-of-tongue from "epiphany." It may also be called "Three Kings' Day" although the identification of the Magi as kings has no foundation in the Gospels. It is based on a passage in the book of Isaiah (60:1-5 KJV): "Arise, shine; for thy light is come. and the glory of the Lord is risen upon thee... and the Gentiles shall come to thy light, and kings to the brightness of thy rising...". The source of the traditional names of the Magi, Gaspar, Melchior and Balthazaar may be from Excerpta Latina Barbari, page 51B (probably written in Alexandria around the year 500):
"At that time in the reign of Augustus, on 1st January the Magi brought him gifts and worshipped him. The names of the Magi were Bithisarea, Melichior and Gathaspa."

The thing that fascinates is the great amount of syncretism involved; that is, the mixing of earlier religious beliefs and traditions into Christianity in the early years of the Christian faith. According to Roman historian, Varro, giving gifts at the new year went back the foundation of the city of Rome, itself, at festivities that took place in honor of the god Saturn on or around the winter solstice. The Latin term for these gifts was strenae (plural) (from the goddess, Strenia, originally a Sabine divinity, goddess of good fortune, inhabiting a sacred wood in Rome). The word has survived into modern Italian as strenna, specifically a Christmas gift. It even spawned an entire publishing branch in the 1800s called strenna editoriale, lavishly printed and illustrated books put on the market in early December in time for Christmas shopping. Thus, the early Roman giving of gifts found its way into the tales of the Three Wise Men and the gifts they brought to the Christ Child. There are books full of these tales of the Magi. I have no favorite, so I picked one I like:

"The old woman we now call befana was approached by Three Wise Men, astrologers from the east, a few days before the birth of Baby Jesus. They said they had been following a star to the place where the the Son of God would be born. It had to be nearby. Could she help them find the precise place? They had brought Him gifts. She was too busy but provided them with shelter for the night. They then continued on their way. Later, she had a change of heart and went after them to help them search for the Child. She was not able to find them again. She had missed seeing the Christ Child and to this day she still searches year after year, leaving toys and candy for the good children she finds and lumps of coal for the naughty ones."

I am pleased to note that the little girl (at least 42 years ago when she was in my middle-school class in Naples went on to become a pediatrician and works with refugees on the island of Lampedusa. She is the one who started my EMERGENCY! page about the migrant crisis in the Mediterranean. She came over yesterday to pay me a pre-Befana visit (not really a tradition, so we started one). She remembered all of the words to The Twelve Days of Christmas. That's a pretty good memory.

to top of this page