The name has nothing to do with Valdéz! 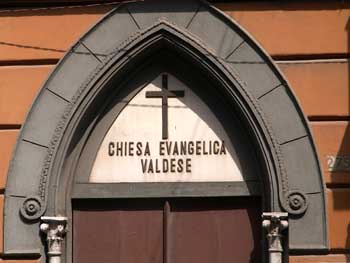 More on Juan de Valdéz      (and the Counter Reformation in Naples)

I remember that my high school buddies and I (terrible snobs!) used to scoff at Sam Cooke’s great 1958 song “Wonderful World,” which assured the listener that the singer didn’t… ”know much about history… biology …geography…[and] … trigonometry…” among other things. (We also scoffed at people who took classes in woodworking and metal shop. Years later, they make and fix things. We don’t.) Now that I know so much more about the things I know nothing about, if I had written that song about myself, I surely would have included geography and theology. After all, the first time I ever heard the term “The Council of Trent” it sounded like it should be part of somewhere English, maybe Stipplingsthorpe-upon-Trent, where the Council sat around in cracked leather armchairs and debated zoning regulations for the new flower garden near the abbey.  Alas and a-hah!, I later found out that the place in question was Trento, in Italy, the birthplace of the Counter-Reformation. At the time, I wasn’t sure what that was. (But I had heard of the Reformation! It was a great symphony by Mendelsohn.)

Elsewhere (the entry on viceroy Toledo) I make the following comment on Juan de Valdéz:

Some sources claim that Naples was a center of Protestantism in the form of adherents of Juan de Valdéz (c.1500-1541). The Spanish historian Francisco Elias de Tejada* (below) says plausibly that the group was very small and not even made up of Neapolitans. Thus, they couldn't have represented any sort of home-grown threat to Roman Catholic orthodoxy. It is also true that Naples was the home of a number of ‘academies’: the Pontanian; the Sereni, the Incogniti; the Ardenti. These were essentially discussion groups where literati and scholars sat around and chewed the intellectual fat. No doubt they discussed Martin Luther, the Inquisition, Copernicus —all that— but there is no evidence at all that they were a nest of heresy that would require the offices of the Inquisition to stamp out.


I don’t know that I have any reason to amend that, except maybe the part about “no evidence at all.” I suppose that the Roman Catholic orthodoxy at the time might have found all sorts of good reasons to smell heresy in a group of reformers (potential Protestants) numbered in some sources as high as 3,000 sitting around in Naples and talking about what a clever fellow this Martin Luther was. (“Lutero,” in Italian, puts the accent on the second syllable. If you give the name the German accent (on the first syllable) it sounds like Martin L’utero —Martin the Uterus— and I bet the Inquisition Pun-Dits had fun with that one!)


And speaking of word play, we should note that there is, indeed, a "Valdese" Protestant church in Naples, but that name has nothing to do with de Valdéz (also spelled as "Valdés" in some sources). Valdese is Italian for "Waldensian"; the name derives most likely from Peter Waldo, a religious reformer from Lyons in the 12th century. There are about 50,000 adherents in Italy. Although they now term themselves "Protestant" or "Evangelical," they are obviously not part of the later Protestant Reformation associated with Luther. Historically, they have more in common with their early contemporaries such as the Cathars and Albigensians; all of them were deemed "heretical" by Lucius III in the 12th century and then by the Fourth Lateran Council of Innocent III in 1215.

[Valdéz had a twin brother, Alfonso, prominent in Spanish politics, and there is some confusion among those who write on the subject about just which Valdéz they are talking about. Alfonso was secretary of the imperial chancellery at the court of Charles V in the 1520s. His brother, our Juan, was the "Protestant" under discussion here.]

I have had difficulty finding out even where Juan lived or had meetings with similarly-minded reformers (or nascent Protestants, as the case may be). One source claims that the place was “on an island in the Bay of Naples.” That is too vague to be of any help. It couldn’t have been Capri, Procida or Ischia. Maybe the writer meant Nisida. Who knows? Another source has the clumsy sentence,


On the western arm of the Bay of Naples, hard by the tomb of Virgil, looking forth on the calm sea, and the picturesque island of Capri, with the opposite shore, on which Vesuvius, with its pennon of white vapor atop, kept watch over the cities which 1,400 years before it had wrapped in a winding-sheet of ashes, and enclosed in a tomb of lava, was placed the villa of Valdez.

By way of background, Valdéz, while he was still in Spain, was certainly influenced by the movement of Christian mystics known as the alumbrados (illuminated ones); because of their allergy to external ritual, their dislike of priestly intermediaries, and their emphasis on personal, inner spiritual experience, they were in constant conflict with Church authorities. By the time of his arrival in Naples, Valdéz had already published Diálogo de Mercurio y Caron, attacking the corruption in the Roman Catholic Church. His first publication at Naples was a philological treatise, Diálogo de la Lengua (1533), but the thrust of his work was towards interpreting the Bible and —the mainstay of Protestantism— justification by faith. He also translated portions of the Bible from Greek and Hebrew into Spanish. Valdés died in Naples in May, 1541.

I found a glowing passage about him and his group. (Obviously, this was written by a Protestant!):

Such were the illustrious men and the high-born women that formed this Protestant propaganda in Naples. It comprehended elements of power which promised brilliant results in the future. It formed a galaxy of rank, talent, oratory, genius, and tact, adapted to all classes of the nation, and constituted, one would have thought, such an organisation or "Bureau" as was sure to originate, and in due time accomplish, the Reformation of Italy. The ravages the Gothic nations had inflicted, and the yet greater ravages of the Papacy, were on the point of being repaired, and the physical loveliness which Italy had known in her first days, and a moral beauty greater than she had ever known, were about to be restored to her. It was during those same years that Calvin was beginning his labors at Geneva, and fighting with the Pantheistic Libertines for a secure foothold on which to place his Reformation, that this little phalanx of devoted Protestant champions was formed on the shore of Naples.

Today, the only thing evident about Reformation in Naples —indeed, in all of Italy— is that it failed. No Italian city or region went over to the Reformation. (On the other hand, Italy never had to suffer through a later Thirty Years War between Catholics and Protestants, either.) I have nothing illuminating to offer as to why the Protestant Reformation failed in Naples or Italy, in general, other than to assume that it simply could not overcome Inquisitorial suppression or the entrenched alliances that bound the governing classes to the Church. Massimo Firpo* (below) points out that “…In Europe the Reformation succeeded where it could count on significant intervention by the political powers, and it failed where this did not occur.”

After the death of Valdéz, his writings continued to inspire church reformers (not necessarily outright and schismatic Protestants) throughout Italy, but, eventually, in the face of the Counter-Reformation, they were forced into that silent state of “inner emigration” called "Nicodemism" (1)—outwardly conforming to Roman Catholicism while inwardly professing their true faith.

As you might imagine, there is a great wealth of literature about the Reformation, the Counter-Reformation, and specifically the Reformation, or ostensible lack thereof, in Italy (see bibliography, below). As far as I can tell, recent writers, such as Firpo (below) view as oversimplified the traditional claim that Protestants simply went into hiding in Italy in the mid-1500s and didn’t come out until the Risorgimento and anti-clericalism swept Italy in the mid-1800s. Also as far as I can tell, neither Valdéz nor the group around him should be viewed as flaming rebels against the Catholic church—transplanted German Lutherans, so to speak— but much more as reformers in the spirit of Erasmus, less interested in schism than in adherence to evangelical simplicity and their own inner voices when it came to the interpretation of Scripture.

But that is only as far as I can tell, for as the song says…don't know much about...
Notes:

1. "Nicodemism." The term is attributed to Calvin and is based on the Gospel of John, which describes one Nicodemus as afraid of being seen openly with Jesus but willing to visit him in secret. The term is not altogether positive since —while it may be taken to mean inward steadfastness— it can also imply cowardice.

Relevant works from the 19th and early 20th century include:

More recent bibliography is found in