from Luciano Mangiafico, friend to this
website and frequent contributor
entered on 22 May 2022


The Young Sir Richard Burton in Naples
by
Luciano Mangiafico 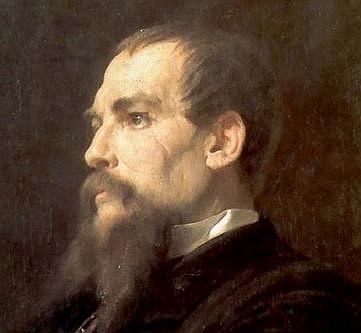 Movie-goers, this is not Richard Burton, the great Welsh actor noted for his charismatic presence, mellifluous baritone voice, and steaming 1962 affair with Elizabeth Taylor during the filming of Cleopatra (he knew he was done for when Liz brought the asp home from work). There was another famous,  SIR Richard Burton (1821-90), not an actor but an English soldier, explorer, linguist, author, and diplomat. He lived in Italy for a number of years and died in Trieste, where he was the British consul. As a teenager he was in Naples for almost three years. The two Burtons are not related but I regret that the actor was never knighted. Just think of the movie poster! — "Sir Richard Burton as Sir Richard Burton!" Excuse my mind while it boggles.

My "English soldier, explorer, linguist, author, and diplomat" was a bit earlier. His father, Joseph N. Burton was Irish and rose to Lieutenant Colonel in the British army. He was not a good money manager and moved the family to continental Europe, where life was cheaper, first to France and then to Italy. In Italy, the Burtons lived first in Leghorn (one of the silliest names on any planet —in Italian, the name is Livorno). Then they went to Pisa, Lucca, Siena, Perugia, and Florence. From Florence, they moved to Rome and then to Naples, where they settled from 1833 to the spring of 1837.


By then their household had three children: the eldest, our Richard, who was 15, Edward, and Maria. Living with them was also Mr. Dupre, a college graduate, engaged as a tutor for the children. In  Naples they lived in the Chiaia area and agreed to return there at summer’s end, but for the summer they went to Sorrento. The boys had plenty with Sorrento as a base. They bathed in the clear blue waters, explored the inlet and caves along the coast, took trips to Ischia, Procida, and Capri, hunted birds, went to Salerno and Paestum, and climbed Mount Sant’Angelo. They didn't study much but did learn to play chess.

Back in Naples at the end of the season, they went to the Solfatara and to the Grotta del Cane (Grotto of the Dog), where the adventurous Richard played the part of the poor dog that is pulled out just before he passes out and dies from the noxious fumes. The boys also went to Herculaneum and Pompei, and climbed to the crater of Vesuvius. Young Richard, as always curious, started down but fortunately the others talked him out of it. The two boys occasionally got loaded on sherry. Daddy gave them the stuff. (Can't go wrong with an old man like that!) Daddy, also keen to broaden their cultural horizons, hired a painter to give them lessons and also a fencing master. Richard was not much for painting but devoted a few hours daily to sword-fighting!

They hung around with the lazzaroni, doing what they did, such as eating pasta with their hands!* The bothers got involved with some prostitutes who lived near-by, and even promoted a party that turned into an all-night affair. When they began exchanging notes with the prostitutes, and when their parents found out what they had been up to, they escaped a whipping by fleeing to the rooftops, not coming down until their parents had calmed down. (I sense a great future for Richard!)


*The lazzaroni of Naples were the poorest of the lower class. Some were beggars, while others lived by service as messengers, porters, etc. They had a role in the social and political life of Naples and the kingdom of Naples. They were prone to act collectively, often proving formidable in periods of civil unrest and revolution. Eating pasta with the hands is a stereotype that crops up in modern comic portrays of a past that ended after WWII. Also see this entry on the "worms" of Naples.


The biography of Sir Richard Burton written by his wife says that the family was in Naples during the cholera epidemic of 1836-37. If so, they were in the city during the first round of that dreaded disease. Richard and his brother, even as people were dying around them, took it in stride. They disguised themselves as funerary workers and helped remove corpses from houses, helping to carry them to the burial pits, the Cimitero delle 366 Fosse (Cemetery of the 366 Trenches) at Poggioreale. Here is how Richard, according to his wife, recalled it:


“The visits to the pauper houses...were anything but pleasant, and still less the final disposal of the bodies. Outside Naples was a large plain, pierced with pits, like the silos or underground granaries of Algeria or North Africa. They were lined with stone, and the mouths were covered with one big slab, just large enough to allow a corpse to pass. Into these flesh-pots were thrown the unfortunate bodies of the poor, after being stripped of the rags which acted as their winding-sheets. Black and rigid, they were thrown down the apertures like so much rubbish, into the festering heap below, and the decay caused a kind of lambent blue flame about the sides of the pit, which lit up a mass of human corruption, worthy to be described by Dante.”


Soon after, Colonel Burton moved his family to Sorrento, where the effects of cholera were mild, and in the spring of 1837 left Italy for France. Young Richard, after aimless and casual studies in England, joined the Army, mastered a half-dozen Eastern languages, went disguised as a Muslim pilgrim to the holy city of Mecca, served in the cavalry during the Crimean War in 1855, and "rediscovered" Lake Victoria, the fabled headwaters of the Nile in 1858 ("re-" because it was really known to the Spanish much earlier). He also translated, among other books, the Kama Sutra, The One Thousand and One Nights, The Pentameron of Giovanni Battista Basile from the Neapolitan dialect, and the poetry of Camoens from Portuguese. He was also a British diplomat in Equatorial Guinea, Brazil, Damascus, Syria, and Trieste (1872-90), where he died.

When Burton died in 1890, he was a celebrity and had countless obituaries, all of which had to deal with Britain's  Obscene Publications Act of 1857, which resulted in many jail sentences for publishers in Victorian Britain,  with prosecutions brought by the Society for the Suppression of Vice. Essentially, those who praised him could say he was an extraordinary linguist and explorer but could not actually print sections of his writings. They could not even tell you that he had created the Kama Shastra Society to print and circulate books that would be illegal to publish in public. He had a few detractors because of his flamboyance. The Athenaeum (No. 3287, Oct. 25,1890 P. 547) wrote:


"...England has lost one of her most successful travellers and explorers, an esteemed Oriental scholar, and a literary man of considerable gifts...he was a wanderer over the face of the globe, being accompanied on most occasions by the gifted lady whom he took to wife in 1861...In his official career he did not achieve the success to which his high attainments and wide knowledge, especially of the East, entitled him...England must be indeed rich in talent when she can afford to waste in the routine of consular duties a man of the courage, the capacities, and the vast acquirements of Burton...The knighthood bestowed upon him in 1886 was but an empty honour."

Burton and his wife, Isabel, are buried in a tomb in the shape of a Bedouin tent (image, right), designed by Isabel, in the cemetery of St Mary Magdalen Roman Catholic Church, Mortlake, in southwest London. Next to the chapel in the church there is a memorial stained-glass window to Burton, also erected by Isabel; it depicts Burton as a medieval knight. Burton's personal effects and a collection of paintings, photographs and objects relating to him are in the Burton Collection at Orleans House Gallery, Twickenham. Inscribed on the front of the tent-tomb is this  sonnet by Justin Huntly McCarthy:


"FAREWELL, DEAR FRIEND, DEAD HERO! THE GREAT LIFE   /  IS ENDED, THE GREAT PERILS, THE GREAT JOYS;
AND HE TO WHOM ADVENTURES WERE AS TOYS,   /   WHO SEEMED TO BEAR A CHARM 'GAINST SPEAR OR KNIFE
OR BULLET, NOW LIES SILENT FROM ALL STRIFE  /   OUT YONDER WHERE THE AUSTRIAN EAGLES POISE
ON ISTRIAN HILLS. BUT ENGLAND, AT THE NOISE  /   OF THAT DREAD FALL, WEEPS WITH THE HERO'S WIFE.
OH, LAST AND NOBLEST OF THE ERRANT KNIGHTS,  /   THE ENGLISH SOLDIER AND THE ARAB SHIEK!
OH, SINGER OF THE EAST WHO LOVED SO WELL  /   THE DEATHLESS WONDER OF THE "ARABIAN NIGHTS",
WHO TOUCHED CAMOEN'S LUTE AND STILL WOULD SEEK  /   EVER NEW DEEDS UNTIL THE END! FAREWELL!"

Burton wrote more than eighty books on ethnology, poetry, Eastern literature, anthropology, and travel. He left us works we all know: for example, a magnificent 16-volume collection of tales of Scheherazade and the 1001 Arabian Nights. It enjoyed great success in Europe and itself was further translated into other European languages. After his death, his prudish Victorian wife burned some of his manuscripts, so we'll never know about his translation from Arabic of The Perfumed Gardens of Sheikh Nezwazi: a Manual of Arab Erotology.

to top of this page