or - Real Noisy on the Southern Front

There has been, rightly so, a lot of historical and popular attention (such as the 2006 film Flyboys) given to the young American pilots who flew with the Lafayette Escadrille, the 124th air squadron formed by the French in WWI. Almost no attention, however, has been paid to the Italian version; that is, the air war between Italy and Austria-Hungary and the efforts of similar young pilots trained in the United States and then Italy who flew missions on the very active southern front as part of what was then called in Italy the Aeronautic Corps (the aviation branch of the Royal Italian Army).

At the time in the United States, planes and pilots made up the Aviation Section of the Signal Corps of the U.S. Army (image, right). The only action it had ever seen was a few months earlier, trying to help track down Mexican revolutionary Pancho Villa after his raids on U.S. border towns. That Aviation Section consisted of 131 officers, 1087 enlisted men, and about 280 airplanes. For the war effort in Europe, it was quickly reorganized into the Air Service of the United States Army, part of the large American Expeditionary Force (AEF) sent to Europe in 1917. Most went to France; some went to Italy.

Italian pilots and the newcomer U.S. pilots trained in Foggia, over the mountains 130 km/80 miles to the NE of Naples. Foggia is today a city of about 150,000 (during WWI it had about half that). It's just to the west of the Gargano, the Adriatic “spur” of the boot of Italy. It's at the top of the large, long plain called the tavoliere (table) called the “bread basket of Italy". It is flat land ideal for farming and --runways! That plus the generally good weather for flying and training means that the town has been surrounded by runways ever since there have been airplanes.

The first contingent of 500 American flying cadets arrived in Foggia for training in the Fall of 1917. Between September 28, 1917, and June 25, 1918, a total of 406 US pilots graduated at Foggia. They were under the command of (and here it gets amusing, if anything at all about WWI can be called 'amusing') Fiorello La Guardia, the future and most popular mayor New York City has ever had!


La Guardia between two of his crewmates in
front of their Caproni bomber.

When the US entered the war, La Guardia was 35 years old and a U.S. congressman, but he stepped down and insisted on going to the front. He was, alas, too short (5'2”/just over 1.57 meters) to be a soldier!  BUT earlier he had taken flying lessons, so he signed up for the US Air Service, was commissioned a first lieutenant, later made captain and major. His boys were known as “the Foggiani pilots” or, more affectionately as “Fiorello’s Foggiani”. The name "Fiorello" translates as "Little Flower". It's an unusual given name. Thus, Little Flower's Fliers.)

True, most American pilots who trained in Italy then went to France for service as fighter pilots, but a detachment of about 75 remained under the command of La Guardia to pursue further training with bombers and then fly bombing missions with the Italian air force. Italy was into the field of military aeronautics very early on, establishing an Army Aeronautical Section equipped with balloons as early as 1884. The country also had the inglorious distinction of being the first to drop explosives from an airplane on an enemy during war, on November 1, 1911, during the Italo-Turkish war.

a better view of the Caproni 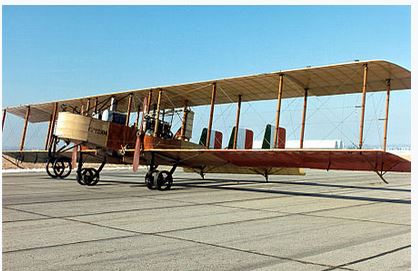 The U.S. pilots were attached to Italian bomber squadrons at Padua, Verona, and Aquila to gain experience. After flying four or five missions with experienced Italian pilots, they were given command of a Caproni heavy bomber with an Italian combat crew. Generally the plane was some version of the Ca-3, a three-engine (one tractor prop on each wing and one pusher prop at the rear. The biplane was of wooden construction with a fabric-covered frame; wingspan 22.74 meters/36 feet 3 inches.


an even better view

(This remarkable graphic is by Richard Dery of fiddlersgreen.net)

The Caproni-3 was the mainstay of the Italian bomber fleet. The crew of four were in an open central nacelle (not really a "cockpit", but simply a large open compartment. The forward machine gunner was at the very front of the ship. Behind him sat the two pilots. The tail gunner was at the back of the nacelle, mounted on a platform above the number 3 engine, which drove the pusher prop. The bomb load was suspended beneath the hull.

La Guardia spent a lot of time on administration and diplomacy. He was a fiery speaker and gave talks to Italian civilians when the war was not going well in late 1917. He spoke Yiddish (his mother was Jewish, surname Coen), German, French, Italian and several Croatian dialects (he lived in Trieste for a while). He was tireless, energetic and flamboyant in his efforts to support the Italian war effort against Austria. The NYT, in their obituary for him on Sept. 21, 1947 wrote:

Mr. La Guardia was unbelievably successful as a propagandist. He addressed mass meetings in Milan, Genoa, Rome, Turin, Naples, Bologna and a dozen other Italian cities, and stirred up tremendous enthusiasm. For his services as a spellbinder the Italian Government made him a commendatore. His war service, however, did not consist entirely of speech-making. He came home with two wound stripes, the result of crack-ups while bombing the Austrian lines. He received the Italian War Cross and was promoted to major.

Indeed, he got in some flight time: five combat missions in the Caproni in September, 1918. His total combat time logged was 10 hours and 20 minutes. One of the Italian pilots he flew with was Cambiaso Negrotto, a member of the Italian parliament.  Since La Guardia, himself, had stepped down from the  U.S. Congress to go off to war, they nicknamed their bomber “The Congressional Limited”. I am going back in time and vote for this guy.