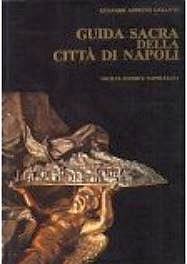 Gennaro Galante was a clergyman, professor and highly respected historian, primarily of the religious history of Naples. He was afforded a generous education by his parents and dedicated his studies to the ancient world, Latin and Greek literature and to the writings of Thomas Aquinas. He was ordained a priest in 1866 by Sisto Riario Sforza, the archbishop of Naples and began a teaching career at various posts.

In 1872 he co-authored Guida Sacra della Citta di Napoli (Sacred Guide to the City of Naples), a work that divided the churches of Naples into 14 daily itineraries (tours) that could be followed; it is still an important reference work (especially in light of the urban reconstruction of Naples after the publication that essentially obliterated some sacred sites. (we know about them largely through works such as these). (Image, right, is the cover of a modern reprint.)

He held various positions such as custodian of the sacred treasures of the cathedral of Naples, and inspector of the excavations and monuments in Pozzuoli. He dedicated much of his life to the catacombs in Naples, particularly the catacombs of San Gennaro, showing that these were indeed Christian catacombs and not simply caves or passageways and some insisted.

The archbishop's palace in Naples contains a collection of Galante's considerable output of literature and research documents, still important for modern researchers. These include (this is a tiny sampling):