There are 2 entries on this page:

We all have strangeness scattered through our lives, giving a dreamlike quality to the most fortunate of our memories. One of mine was discovering Antonio Gaudí, the magical Catalan architect; his Sagrada Família cathedral in Barcelona is a stalagmite of weird geometries—wet sand dripping down through the fingers of a playful giant from another dimension.

I added another memory a few weeks ago on Ischia. I had just finished ploughing through an imposing German tome on the island. It was full of footnotes and umlauts. In fact, you are almost reading about the late Stone Age, the Bronze Age, Pithecusa (the original Greek name for the island) and how the Greeks found in Ischia's Mt. Epomeo another Olympus, another safe hiding place for their Gods.  (You can read all that at the 'Pithecusa' link in the previous sentence.) So, be glad I found Viola, a lovely brown donkey mare, who took me up the slopes of Epomeo, where the spirit of Gaudí dwells.

After making the long storm-tossed crossing from Neapolis and quelling a native uprising at my hotel, I betook me to the quaint outpost of Fontana, the most convenient base camp from whence to begin the climb up the 800-meter high mountain. It was then that I saw Viola—beautiful brown eyes, long lashes, even longer ears, and a mane stroked by, alas, who knows how many coarse hands. She was standing in the main square in Fontana, reluctantly looking for passengers. She looked like Rocinante hoping against hope that Don Quixote had wandered away and would never come back.


"Oh, a donkey," I exclaimed, a veritable Julian Huxley finally seeing his way through to some great biological truth.

"You are, indeed, most perceptive, bwana-sahib," croaked the wizened Chargé du Donkeé. He genuflected in the traditional fashion of his ancestors, touching first his forehead, then his heart, then my wallet. "She will take you right to the top for a mere trifle."

"Hmmm, that's not even a pittance a pound. Not bad. But, am I not too stout—all solid muscle, of course—but a bit too hefty for this delicate steed?"

"Not to worry, O wise one, for it is written that this is the life they are born to."


Viola, naturally, had heard this Bible-thumping fundamentalist interpretation of Genesis 1:26 many times before and was not amused. But, with that floppy-lipped snort that donkeys emit when they dream of their great stallion cousins flashing like Pegasus free and unshod across Arabian dunes, she acquiesced. I climbed aboard and we went straight up, first on a paved road and then the last two-hundred yards or so along a precise trail, partially hewn out of the rock, but mostly just plain worn down by the methodical sculpting of countless plodding hooves.

The summit of Epomeo is a castle carved out of rock. There is no building; all the chambers in the one-time home to an order of Franciscan monks are in the rock. Again, Gaudí's giant friend must have poked his fingers into the lava when it was still warm and pliant, yet firm enough to hold impressions which an age later would become the chapel, dining hall and cells for the monastery of San Nicola.

If you go when there is a mist blowing up the slopes, the jagged rock that forms a watchtower on the summit tears at the stream of whiteness swirling by. It sticks up like a crown on a ghostly head calling you into a fairy-tale, and if you are in the fanciful mood that accepts fairy-tales, then that will be your "strange" moment, the one you remember.

That and the sunrise, because sadly for the monks but happily for you, this mountain retreat is now an inn. You can ride or walk up in the evening and stay in one of the cells. (It's not as bleak as it sounds; each cell has a balcony with a breathtaking view, the beds are clean, and when you run out of gruel, you can go to the restaurant). From the watchtower and various points around the summit, there is a stunning view straight out over the island and the gulf to Vesuvius and the Sorrentine Peninsula. Here, it is pardonable to believe in the illusory astronomy that the Earth is the center of all things, as the sun paces the passage of eternity, slowly shifting, sunrise by sunrise, inexorably along the rim of the mountains and back again. On Ischia, "to watch the dawn from Epomeo" is a metaphor of splendor—to be up there in monastic stillness watching the night become day and to feel that you are the first ever to watch this timeless ritual. 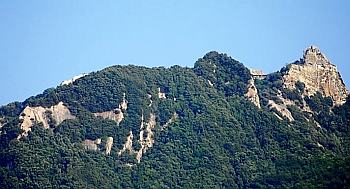 2. Epomeo and the Cave Church of San Nicola

The overriding feature about Mount Epomeo on the island of Ischia is that, as noted in the first entry (above),


the summit is a castle carved out of rock. There is no building; all the chambers in the one-time home to an order of Franciscan monks are in the rock.

That should inform your entire perception of the place. "In the rock" means exactly that. In. The. Rock. Except for the tourist amenities such as the two outside sections (labelled terrazzo in this schematic) and the entrance to the church  (labelled sagrato —parvis, an open space) at the bottom of the schematic) what you see in the schematic of this "mountain retreat" is sll underground. The abundance of mountainous terrain makes the Italian peninsula, in general, a "caver's delight," but it is also a "cave-churcher's (!) delight" —there are many hundreds of small chapels simply built into rock throughout the nation. This particular one on Epomeo is one of the least known, no doubt because of the isolated location. You get to the top after the hike up and are in front of the church; then, you angle around to the back, past the church, to get to one of the most magical and loveliest places in the world. If you get up higher (about where that rock is, above the church (image,below right) you'll be at 798 meters/2589 ft., the highest point on the island, and you will have a 360° view of everything in or near the Bay of Naples. It's spellbinding.

You can and should visit it, at least the part of premises that have been converted to deal with hungry and weary wanderers. As far as inside the church, itself, goes, it suffers from a bad case of on-again-off-againitis, but sufficient restoration has made some good news possible. Most recently it has been open for Christmas for a display and a presentation called “The Birth of baby Jesus on Epomeo” (image, below, left). It may also open for the celebration of other events having to do with the history of saint Nicholas of Bari, such as the commemoration in May of the Translation (moving) of the Relics of Saint Nicholas from Myra [in modern Turkey] to Bari. He was the St. Nick; that is, the archetype for Santa Claus and is very important in almost all Christian denominations. The main church dedicated to him in Italy is the Basilica of San Nicola in the city of Bari.) The ceremony on Epomeo, called simply the festa di San Nicola, involves taking the large statue of the saint from within the church and carrying it up a dirt trail to the highest point on the island and returning it (image, below, right). But you take your chances; check ahead. The best way up is from Fontana, on foot or you can hitch a ride by horseback (the mules have been retired!), but the hike is not bad.

The church served for many centuries as a refuge from Saracen invaders (that is, Turkish pirates in the Middle Ages. The premises have housed nuns, monks, and various species of anchorites, all for the seclusion that the site offers, believe it or not, even today. In the very broad area of “cave churches” it is a significant example. The church was in existence as early as 1459 when it was praised by Giovanni Pontano, the “Father of Humanism” (and part-time resident of the island) in a document that is still conserved on the premises, The monastic cells were built in 1587. There were add-ons in the 1700s including acquisition of adjacent land farther down for cultivation. As noted, some restoration has taken place within the church. Many sources speak of the existence of the church well before Pontano's first mention of it in 1459.

There are some Italian sources, quite detailed in the attention they pay to the inside of the small church. This short extract, much abridged, is from “Ischia sacra. Guida alle chiese“ (pub. CLEAN, 2005) by Achille della Ragione. (The translation is mine.)

Although the inside of the church, especially in the area of the choir, shows the wear and tear of time and humidity on the walls, stucco, and vault, some sections are relatively well preserved. The rear section of the church goes back to the 1700s and contains the reliquary, the small shrine holding sacred relics, specifically part of the altar holding a number of niches with vases of blown glass containing the ancient remains of saints...

...On the side there are two pairs of cherubs joined to a shelf. The arch of the main altar displays a statue of San Nicola of Bari with a child cup-bearer, dated to 1500, by an unknown Campanian sculptor. The sculpture is in a niche framed by two pilasters with compound capitals and an elegant shell on top.

...This is the oldest testimony we have of this hermitage and it is mentioned with high praise in a poem of the day by Pontano. Also worthy of note is the pavement in the area of the apse [the semicircular recess at the rear of the church]. It was done by an unknown Campanian majolica craftsman of the 1700s. It displays a pattern of a flower quite common on the island and which is also found in churches such as Santa Restituta [in the town of Lacco Ameno on Ischia]...

...The whole floor is bordered by a rinceaux strip—that is, a continuous wavy pattern of branches and leaves. Finally, on the ground, halfway back in the nave we find the bell, placed there after the belfry, itself, collapsed. The bell was produced by Salvatore Nobili at the beginning of the 1900s and has a floral pattern on the lower section and a ring of intersecting pointed arches at the top."     [ed. note: the bell has since been returned to the restored belfry.


To top of this page