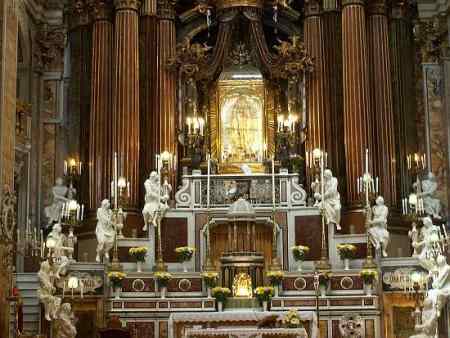 The Church of Gesù Vecchio


The church of Gesù Vecchio (old) is not nearly as well-known or as visible as the almost homonymous Gesù Nuovo (new) near Santa Chiara. Gesù Vecchio is, indeed, not all that easy to find, yet it is worth the hunt. Construction was started in 1554, and in 1624 it was finished as a church, Jesuit college, and refectory. A number of architects oversaw the work during those years. Subsequently, various well-known architects of the Neapolitan Baroque made additions to both church and college, including Cosimo Fanzago. The facade of the church was rebuilt in the late 1600s by Giovan Domenico Vinaccia, and a  library was added in 1700. The Jesuit order was expelled from Naples in 1767; the college and much of the premises were then converted to a Royal College and then made part of the Frederick II University of Naples.

Today, the main entrance to the university library is from via Mezzocannone, the main north-south street leading up the hill to Piazza San Domenico Maggiore. You enter into a large courtyard lined with statues; that courtyard was originally part of the original Jesuit college. New university buildings were added to the north along via Mezzocannone in 1897-1908 such that, from a distance, the entire street looks lined by a single solid building on the east side. The original entrance to the Jesuit premises are on what is today a little used back parallel street to the east in back of the main university building; the entrance to the church of Gesù Vecchio, itself, is on that same street, adjacent to the original courtyard. (I did say it was hard to find!)

The church houses art work by Battistello Caracciolo, Marco Pino da Siena, Girolamo Cenatiempo, and Cesare Fracanzano, among others. The main altar (photo, above) is a striking display of the Neapolitan Baroque: there are ten sculpted figures seated on the balustrades of a double stairway with their gazes directed at St. Francis Borgia at the top, one of the early Superior Generals of the Society of Jesus (the "Jesuits") and the one to whom the church was dedicated. The entire display was the work of two sculptors from Carrara in about 1670, Bartolomeo and Pietro Ghetti. (The former is not to be confused with the Renaissance painter of the same name).

Interestingly the "old" church is newer than the "new" church. The church of Gesù Nuovo was consecrated as a house of worship in 1601 (it had earlier been a private residence). Gesù Vecchio opened to the faithful in 1625, but didn't start calling itself the "old" church until the 1700s, maybe because it was in the old historic center, while Gesù Nuovo is just outside of it. Maybe they flipped a coin. I don't know.