George Norman Douglas (1868 – 1952) was a British writer, now best known for his travel writings about southern Italy. He was a long-time resident of the island of Capri, an honorary citizen of the island, and he died and is buried there. He's in the company of a very long list of late "Grand Tour" northern enthusiasts of the bay of Naples and the south of Italy, among whom we may count Graham Greene, Oscar Wilde, Jacque Fersen, D.H. Lawrence, Alfred Krupp and countless others. Old Calabria, published in 1915, from which the excerpts (below) are taken, is among Douglas' better-known works. Others include Siren Land (1911) (about this area) and a novel, South Wind (1917), about an island (obviously Capri) and its inhabitants.

Much of Old Calabria gives the impression that for many of those smitten with the bay of Naples, there existed only the immediate bay, and that the rest of southern Italy was a dark and mysterious land called Calabria. (Well, there was Sicily, too, of course, also foreboding, all by itself.) Indeed, much of the book is not really about Calabria, but Puglia (Apulia, the long southwestern region along the Adriatic coast). Old Calabria thus contains exquisite chapters about the Saracens of Lucera (Frederick II's loyal Arab army in Apulia), about Frederick's son Manfred and the town of Manfredonia, and about cities of Bari and Taranto (in Apulia); even the chapter cited below is about a place not in Calabria, but rather the province of Matera, in the region of Basilicata, once upon a time called Lucania.

Douglas does eventually get into Calabria on his clockwise trip around the southern peninsula, but for now I choose the area called the Policoro Wood, now a rather confined area directly on the Ionian sea on the sole of the "boot" of Italy (5km/3 mi from the town of Policoro) because I came across a passage that said "this should all be written in the past tense because the Wood has largely disappeared". The Policoro Wood has shrunk by two-thirds from its 1500 hectares (3700 acres/5.7 sq. miles) when Douglas wrote about it; it has simply been run over by urbanization and perhaps is still barely salvageable by good-hearted environmental groups. In the chapter entitled "Into the Jungle" of Old Calabria, Norman Douglas writes:

Twilight reigns in this maze of tall deciduous trees. There is thick undergrowth, too; and I measured an old lentiscus —a shrub, in Italy— which was three metres in circumference. But the exotic feature of the grove is its wealth of creeping vines that clamber up the trunks, swinging from one tree-top to another, and allowing the merest threads of sunlight to filter through their matted canopy. Policoro has the tangled beauty of a tropical swamp. Rank odours arise from the decaying leaves and moist earth; and once within that verdant labyrinth, you might well fancy yourself in some primeval region of the globe, where the foot of man has never penetrated...Yet long ago it resounded with the din of battle and the trumpeting of elephants —in that furious first battle between Pyrrhus and the Romans. And here, under the very soil on which you stand, lies buried, they say, the ancient city of Siris. 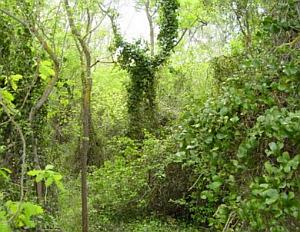 The parcelling out of many of these big properties has been followed by a destruction of woodland and complete disappearance of game. It is hailed as the beginning of a new era of prosperity; and so it well may be, from a commercial point of view. But the traveller and lover of nature will be glad to leave some of these wild districts in the hands of their rich owners, who have no great interests in cultivating every inch of ground, levelling rocky spaces, draining the land and hewing down every tree that fails to bear fruit. Split into peasant proprietorships, this forest would soon become a scientifically irrigated campagna for the cultivation of tomatoes or what not, like the "Colonia Elena," near the Pontine Marshes. The national exchequer would profit, without a doubt. But I question whether we should all take the economical point of view —whether it would be wise for humanity to do so. There is a prosperity other than material. Some solitary artist or poet, drawing inspiration from scenes like this, might have contributed more to the happiness of mankind than a legion of narrow-minded, grimy and litigious tomato-planters.


Among the "good-hearted environmental groups" trying to save the area are the World Wildlife Fund (WWF) with its Herakleia-Policoro Oasis within the Nature Reserve of the Pantano di Policoro Woods. There you can get environmental guided tours about and among the incredible variety of flora and fauna that still abound in what has been called the last patch of Mediterranean coastal forest in Italy, this bit of "prosperity other than material." As well, you have access to recreational activities such as horseback riding along the beach.