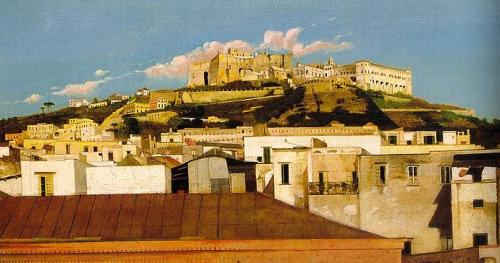 Thomas Jones (1742 – 1803) was a Welsh landscape painter and was best known in his lifetime as a painter of Welsh and Italian landscapes. Jones' reputation grew in the 20th century when some unconventional works of his, not intended for public consumption, came to light. Most notable among these is a series of views of Naples which he painted from 1782 to 1783. He broke with the conventions of classical landscape painting in favor of direct observation. His view of the view of the San Martino hill in Naples is very unusual for its time. His autobiography, Memoirs of Thomas Jones of Penkerrig, went unpublished until 1951 but is now recognized as an important source of information on the art world of the 18th-century.

Last March 26 [2020] the National Museum of Cardiff tweeted that the sketchbook of painter Thomas Jones (Trefonnen, Wales, 1742 - Pencerrig, Wales, 1803) was now on-line. We now have three copies; the other two are in the British Museum. It is exciting to browse through, even if only in this digitized format. They are glimpses of Italy captured "en plein air" between March 24, 1777 and December 9, 1778, as Jones wrote on the cover. He was in Naples from Sept. 15, 1778 to January 22, 1779. One year later, he would return to our city of Parthenope; that is, from April of 1780 until August of 1783, when he finally left for home, facing a three-month sea voyage that turned into a true Odyssey. Once back in Britain he wrote a priceless diary filled with additional notes of the time he had spent in Italy.

This Welsh artist's renderings of Naples are a joyful tribute to the state of grace he was in. They are minimalist pictorial fragments, surprisingly modern, that redesigned and gave a new face to our city. As Anna Ottani Cavina (editor of the Italian version of his Diary) writes: "...the city truly found in Jones an artist who knew how to deal with myth" (1).

The sketchbook (which Jones, himself, always called a "pocketbook") published by the Welsh museum contains sketches related to the Roman period as well as to the first Neapolitan period. They are not just monuments and streets; there are boats, animals, and people in those yellowed pages. Jones included the dates and locations of the sketches and sometimes even notes to himself of the colors he should remember to use. That's not all. Here is something curious. Among these precious visual memories, we find a little note that is, in fact, a sign of everyone's times -- a bar tab! (image, right) Who had what and how much it cost! They ate and drank for 97 somethings (probably grani --an archaic unit of coinage). The wine cost 0.27, bread 0.05, "macaroni" 0.15, fish 0.30, "provatura" (provola) 0.10, cheese and fruit 0.10.

There's no date on that, but November, 1778, is possible since the next page has a series of sketches from Nov. 11 of that year. Is there a clue in his diary? You check Tuesday, November 10, and see that Jones had a sore throat and stayed home for two or three days. Then, Saturday the 14th, he and the painter John "Warwick" Smith, the composer and violinist, Stephen Storace, and the Irish merchant, Cobley, went off to the Campi Flegrei (Flegrean Fields) (though the sketchbook really shows the so-called "Temple of Diana", drawn on November 13) (image, left). They visited Pozzuoli, Lake Averno, Cuma, Miseno, and Baia. Then they had a meal at a small country inn in the Campi Elisi (Elysian Fields) in Bacoli (2). Is this where the artist scribbled that note? Maybe...?

The wandering painters knew no rest. The world called and back went Jones again and again to the Flegrean Fields ... yes, yes...of course, to look for more hidden and scenic glimpses, but, as he reminds us as well, to have a bit more of the fine wine from Bacoli.

This is the link to the National Museum of Cardiff page on Thomas Jones' sketchbook of Naples,

and this is the link for the Opus Continuum Facebook page on the same topic: