I can’t wait to break this news to my friends at the local “slow food” club. Their logo is a snail (really!) and they (my friends, not the snails) pride themselves on waiting for their meals as they lavish insults on barbarous tramontane habits such as “fast food.” After all, they reason, their imperial ancestors dined slowly, sumptuously, in the most leisurely Claudius-peel-me-a-grape fashion imaginable.


Hah! I say Hah! I call their sloth-besotted attention to Dr. Penelope Allison's recent book The Insula of the Menander at Pompeii Volume III: The Finds, a Contextual Study (Oxford University Press, 2007). It contains catalogues, analyses, photographs and drawings of 2,000 archaeological artefacts excavated in Pompeii. The average ancient Roman ate on the run (!) and—(drum-roll)—did not wine and dine in measured decadence the way you see them doing in movies about ancient Rome. As a matter of fact, the ancient Romans never even saw movies about ancient Rome! (Dr. Allison doesn’t say that; I’m just trying to help out.) Allison says, "In many parts of the western world today, a popular belief exists that family members should sit down and dine together and, if they don't, this may represent a breakdown of the family structure, but that idea did not originate in ancient Rome."


Allison found a lack of tableware and formal dining or kitchen areas in the homes in Pompeii. Instead, there were isolated plates here and there, such as in sleeping quarters. She also found mini barbecue-type fire boxes, suggesting "BBQ or fondue-style dining.” "Similar to how children today bring a plate of food to their rooms before watching TV or playing on the computer,” says Allison, “my guess is that Roman youths would tote food to certain areas where they possibly engaged in other activities." Got that, mater? Multi-tasking!

Another authority on ancient Rome, Professor Stephen Dyson of the University of Buffalo says that Allison’s book is “meticulously researched” and adds, "We've also found numerous fast food restaurants in Pompeii and other parts of ancient Rome, " calling these places a cross between "...Burger King and a British pub or a Spanish tapas bar. …Most Romans lived in apartments or rather confined spaces, and there is not much evidence for stoves and other cooking equipment in them," he says, adding that "Italy's vibrant street and bar scenes today, along with the often multipurpose design of homes with bedsteads stacked in a corner, or kitchenettes in surprising places, reflect the wonderful, slightly chaotic, aspects of early Roman life.”

*Can I get some fries?


[See related item on the Roman thermopolium.]  [And yet another one] 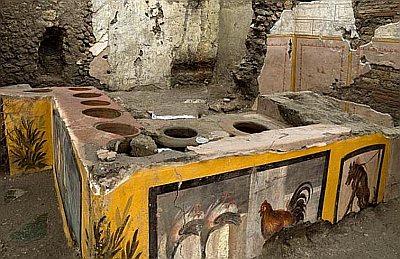 It is easy to overlook the fact that much of what was buried by the famous eruption of Vesuvius in 79 AD —such as the major Roman towns of Herculaneum and Pompeii— is still buried and, indeed, will remain buried because, as in the case of Herculaeum, a modern town (Ercolano) has been built on top of the old one, and you don't just march in and tear down the homes of tens of thousands of residents just to uncover the marvels of antiquity. In the case of Pompeii what you see as you go through the ruins is, indeed impressive (see this consolidated Pompeii page). Much of the recent work has been in a section that is currently being excavated for the first time. The new discovery is of a Thermopolium, essentially a snack bar serving hot fast-food and beverages to seated customers in a hurry to grab a bite and then rush off to build an empire. The site was buried in volcanic ash, and is exceptionally well preserved. Massimo Osanna, director general of the Archaeological Park of Pompeii spoke with news media about
the new discovery: “As well as bearing witness to daily life in Pompeii, the possibilities to analyze this thermopolium are exceptional because for the first time we have excavated a site in its entirety."

The volcanic ash meant that many items and even human remains were perfectly preserved for thousands of years. Some of the detail preserved by the volcanic ash is, indeed, almost uncomfortably personal — human remains, of course, including those of person fleeing the eruption who was, said the director, “surprised by the burning vapors just as he had his hand on the lid of the pot he had opened”. This snack bar or stall is one of many that have been found by archaeologists in ancient Pompeii; however this one is the first to be fully excavated. The service counter was decorated with polychrome patterns and pictures of animals that were probably on the menu, such as ducks and roosters. In some of the food pots there were tiny pieces of duck bone as well as bones from pigs, goats, fish and even snail shells. The site was partially uncovered last year and now has been revealed in its entirety. The word, itself, thermopolium — is from the Greek “thermos” for hot and “poleo” to sell. These eateries were very popular in the Roman world. Pompeii alone had around 80 of them.