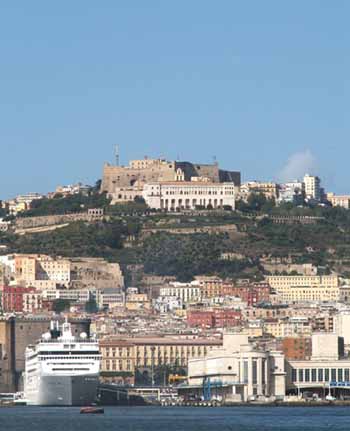 The Museum of San Martino is one of the most evident landmarks in Naples —a huge, white ex-monastery perched on the Vomero hill, visible from almost everywhere in the city and from all points on the waters of the Bay of Naples. What is not so evident is that the area directly below the museum, extending around the slope to provide a 260-degree panorama to the east, south and west is a 20-acre oasis called the Vineyard of San Martino.

The vineyard rises steeply from 100 m (300 ft) above sea level to 200 m (600 ft) through a series of terraces, starting from in back of the buildings along the street named Corso Vittorio Emanuele and stopping directly at the wall of the museum itself. Originally, the grounds were part of the monastery, a vast area set in isolation above the city. That situation prevailed for centuries until the late 1800s when the newly unified Italian state passed a series of laws expropriating a great amount of property belonging to the Catholic church in Italy and, thus, essentially closing many monasteries. Since the late 1860s, San Martino has been a museum owned and operated by the state.

The vineyard is in private hands, however, and the owner seems intent on keeping it intact, isolated and as green as possible. The division of the vineyard from the old monastery in the late 19th century unfortunately led to the lack of an integrated plan to care for the grounds, particularly where run-off from rainfall on such a steep slope is concerned. There have been a number of earthslides over the last century, with water building up behind some terrace walls and then eventually bursting them. Restoration, however, of a large section of the terrace walls below the museum is in progress, and much of the property is still under cultivation as a genuine, producing vineyard. The most striking thing about the vineyard is that it rests above an urban area of over a million, yet it is pastoral, almost surreal —an unexpected patch of green and quiet.

update: June 2014. This marvelous vineyard is now the site of activities promoted by Piedi per la Terra (Feet for the Earth) a non-profit social organization that runs such things as summer camps for children on the premises (see this link).