The National library in Naples has recovered one of Torquato Tasso's sonnets by buying it from a private collector. It will be added to the large collection that they already have and presented to the public in a small ceremony. There are other bits of new "Tassobilia" such as a love-letter he wrote to women he was in love with. Who stole the sonnets in the first place and is that private collector now in jail? I don't know and you must be kidding.

Torquato Tasso (1544-1595), Sorrento's most famous son, was not in the town in June 1558, the date of a vicious sacking of Sorrento by Saracen pirates, one that killed thousands of persons, and saw many more carried away into slavery. He was fourteen years old at the time and had already moved away to Rome. But the raid was a pivotal inspiration for his masterpiece Gerusalemme liberata [Jerusalem Delivered] (1574), still considered one of the great epic poems in Italian and at the time viewed as the great Epic of Christendom, recalling, as it did, the First Crusade with its stirring opening:

Christians at the time of Tasso were still almost within living memory of the fall of the thousand-year old Christian Empire of Byzantium, and Gerusalemme liberata filled a need for rousing reminders of glory. Tasso was compared to Homer, Vergil and Dante, and though such comparisons now seem strained, the work fit the spirit of the times and was the most popular piece of Italian literature for many years. Nevertheless, Tasso's life was a turbulent one, for even his masterpiece, in spite of popular acclaim, was severely criticized by the Inquisition. This disturbed Tasso, as did the relative failure of virtually all of his other works. Tasso has become a metaphor of the disturbed and misunderstood genius. He made almost no money at all from Gerusalemme liberata, and he wandered incessantly, selling his stray poems. He suffered bouts of depression and madness, even being locked away for a while. This great poet wandered incessantly looking for something. This new addition to the library makes us wonder about his life.

There is no shortage of information about his early life but nothing in it is very helpful. So the cliffs and mountains
of Sorrento, while proverbially tranquil, are also a facade covering his life of disappointment and hardship. Torquato started out fine. His father was a nobleman and respected lyric poet. His mother was also nobility and connected with illustrious Neapolitan families. But Naples at the time was run by the Spanish who set up the Inquisition and had little or no use for the home-grown rulers of southern Italy. The Spanish found an excuse to dump the local prince of Salerno; they outlawed him, took his property, and did the same thing to those he had helped with patronage. That included the Tasso family. Before that, Torquato had been the poet prodigy in a Jesuit school. He was a brilliant child. His precocious intellect and religious fervor got attention and admiration. At the age of eight he was already locally famous.

This statue is in Sorrento. 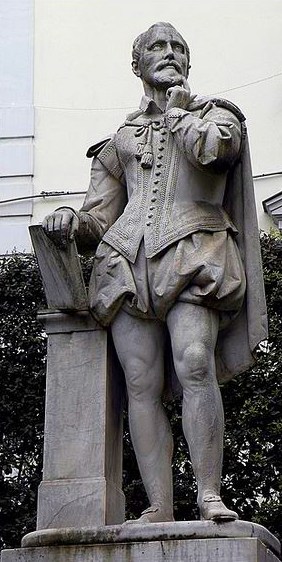 Then it was downhill. His life became a mental roller coaster that modern medicine calls "bi-polar disorder". His mother let him go to Rome to find his father, now living hand-to-mouth in exile and poverty. His father, Bernardo, was a poet, though, and when an opening at the court of Urbino (on the Adriatic, NE of Rome) was offered to him in 1557, he gladly
accepted it. His son went with him and for a while enjoyed the court life of aesthetics and literature.Venice is just to the north and now his father went there to superintend the printing of his own poetry. He took Torquato son and apparently giving up his own ambition, devoted himself to making a better life for his son. He sent Torquato to Padua (near Venice) to study law. Torquato, of course, had no interest in law and spent his time
reading philosophy and writing poetry. He produced by 1562, at the age of 18, a 12-canto poem called Rinaldo. It was original and so remarkable that even then people said he was the most promising young poet of his time.

Torquato then fell in love with various young women, which is where those recovered love-letters come from. They say he courted two of them at the same time. Through all of this his life was hectic and breathless - write, move, write, move, write, move. His father died in 1569. That took away the one anchor in his life. He started to drift. Badly.

His great epic, Gerusalemme liberata, was finished in 1574, when he was 31. The best days of his life were over and he knew it. He finally cracked, and, like many with such a condition, he knew he had cracked. The Duke of Ferrara had him committed to the St. Anne madhouse in Ferrara in 1579, more as a favor to keep him out of the clutches of the
Inquisition. He stayed until 1586.

We still pay tribute to great poets and writers. I don't know if that means less now than it did then, but in 1595 in
Italy if you had a man in your midst whom people spoke of as another Dante or Virgil, you honored him. In 1595 Pope
Clement VIII invited Tasso to the Capitoline Hill in Rome to be crowned "king of poets", as they had done with Petrarch a few centuries earlier. There is no higher honor. Yet on April 1, 1595, a few days before his "crowning" was to take place a coach toiled up the steep Trasteverine Hill to the convent of Sant'Onofrio. The monks came to the door to greet it. From the carriage stepped Torquato Tasso and told the prior he had come to die with him. Tasso died in Sant'Onofrio in early April, 1595. He was 51.

His works were widely translated and adapted. Until the beginning of the 20th century, he was one of the most
widely read poets in Europe. He had an enormous impact on later poets, artist and musicians. A short list:

- Tasso influenced much English Elizabethan poetry;
- Claudio Monteverdi wrote music based on his poetry; Gesualdo put many of Tasso's text to music;
- Johann Wolfgang von Goethe wrote a play, Torquato Tasso, in 1790, and also a cantata text,  inspired by                     Gerusalemme liberata, later set to music by Johannes Brahms;
- Giacomo Leopardi wrote Dialogo di Torquato Tasso, a prose work about Tasso's long stay in the St. Anna madhouse
in which a "Genius", or ghost, visits Tasso to console him in his loneliness;
- Among the numerous operas based on Gerusalemme librata are works by Lully, Alessandro Scarlatti, Vivaldi, Handel,
Haydn, Salieri, Cherubini, Rossini and Dvořák, and now an experimental modern opera on the theme, by Judith Weir,       transposes the scene into contemporary Iraq;
-Both Edmund Spenser and John Milton were greatly influenced by Tasso's work;
-Lord Byron's poem "The Lament of Tasso" narrates Tasso's spell in St. Anna's hospital;
-Gaetano Donizetti wrote an opera on the subject of Torquato Tasso (1833) and incorporated some
of the poet's writing into the libretto;
-Franz Liszt composed a symphonic poem, Tasso, Lamento e Trionfo [Lament and Triump];
-Artists inspired by Jerusalem Delivered include Tintoretto, Domenichino, Van Dyck, Delacroix, and many others.

It's a long list. I think many later artists, those who wrote, painted and made music about Tasso, thought to
themselves: "Look at that poor man. I hope that doesn't happen to me."