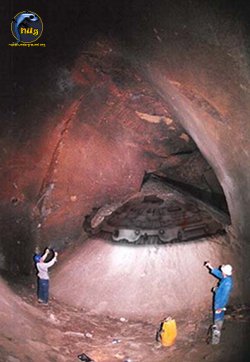 I missed this a month ago. Our fun-loving spelunkers from NUG (Napoli Underground) ran this on their webpage on April 1. Get it? The webmaster assures me that they hooked at least a few April fools with it.

This incredible discovery came about almost by accident during one of the many excursions our group undertakes on Mt. Gauro in the Flegrean Fields. In reality, Mt. Gauro is an ancient volcanic crater that today is the site of Carney Park (a park for the US military community).

The area has been surrounded by myth for centuries, and there are cases of careless explorers who have paid with their lives while climbing in and out of the many ravines on the grounds (the yellow tuff that makes up the crater walls of Gauro is not very compact and there are numerous fractures, and whoever ventures into them has to be cautious, indeed. The very dark caves, for the most part collapsed, are said to contain priceless treasures of the mysterious inhabitants of an underground city, the mythical abode of the Cimmerians that Greek geographer, Strabo, mentions. Explorers have been seeking the entrance ever since.

Indeed, a number of medieval texts affirm the existence of such a city and, as recounted in the 13th-century document, Pathenopean Chronicles, Virgil, himself, is said to have come by his superhuman powers in this place. It is there that he and his disciple, Filomeno, discovered the burial site of the centaur, Chiron, and "removed from beneath his head a book that instructed them in necromancy and other sciences..."

We have that from the Chronicles and, as we know, legends always have at least some basis of truth about them, but we never expected to stumble on that strange metal object that like some uneasy guardian half-hidden from the world above blocked the broad passage in a large cavity found during a recent exploration. The entrance, itself, to the chamber was small and overgrown with vegetation, but after a short stretch around some curves a narrow passage opened off to the side from which issued a chilling wind. Among large blocks of tuff broken off from the ceiling we passed through the entrance of an imposing chamber; our lights flickered over the broken fragments of rock that littered the ground and revealed something best described by the accompanying picture rather than by words. Did the Americans know about this? What is really hidden there? And for how long? Those are legitimate questions in a land where the earth has kept its secrets hidden for so long.