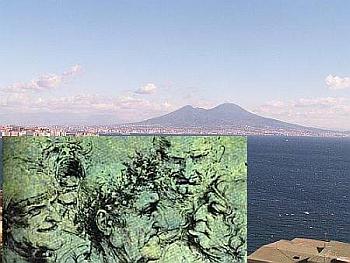 I couldn't agree more. Or maybe I couldn't disagree more. (I got lost at "teleological reflective judgment.") Anyway, it got me thinking about "ugly." I didn't grow up with that concept. There were a lot of positive words, such as good looking, beautiful, handsome, etc. Negatives included plain, but we never called people ugly. Negative adjectives usually referred to personality rather than physical appearance. Thus, a handsome guy could still be a jerk. I wasn't truly made aware of ugly as a simple descriptor until I moved to Naples.

A short time after I barreled my lock and stock into a rather large Neapolitan extended family, I ran into one of my extensions on the cable car. I knew he was a relative because I had met him at a family outing, but I really had no idea exactly who he was. Keeping track of my in-laws is an exercise in kinship anthropology of Dostoevskian proportions. (You will recall that Sergei's second cousin's niece's sister, Anna, whose grandmother's stepbrother, Maxim, is really the bastard son of Lt. Kasov's uncle, has been using her maiden name ever since page 445, just to keep you on your toes.) Anyway, (you can get off your toes, now—or at least get off mine) he (my relative, not Dostoevsky —c'mon, pay attention!) recognized me and called me by name, but I couldn't place him. When I reported the incident to my wife, she asked: "Who was it?"

"I don't know."
"Well, what did he look like?"
"Hair, arms, legs, the usual things. Nice little guy. Getting along in years. Very amiable."
"Was he ugly?"


Was he ugly?!  Now, that was the first time in my life that I had ever heard that question! Forget Caucasian male, medium build, receding hairline, aquiline nose, high cheekbones, lantern-jawed, almond-eyed, brachycephalic, identifying marks, scars or tattoos. Why, yes, officer, I can describe the suspect exactly: he was ugly! How ugly was he? Well, I'll tellya! Why, he was so ugly …(wake up the drummer for some rim-shots!)  …we didn't know if that was his face or whether his neck simply had a bad case of acne! (ka-bam!) Why, his mother used to put a sack over her own head when she breast-fed him! (ba-boom!) She tried putting one over his head once, too, but she got arrested for bag abuse! (ba-da-boom!) Why, he was so ugly, he looked in a mirror once and he broke!  (Forget it. Tell the drummer to go back to sleep.)


When my wife found out from the family grapevine (a Beaujolais-sized vineyard, really) who I was talking about, she couldn't believe it.

"How can you possibly say he's not ugly?! He's the ugliest one in the whole family!"
"But…," I sputtered, "…you just can't say that about someone!"
"Why not? It's not his fault, just like it's not someone else's merit to be good-looking. God got distracted and let the clay sit too long, that's all." I was relieved to know that when you're working with hydrous aluminum silicates, even He is not perfect.

Indeed, in Naples, as in much of the world, "ugly" is no big deal. Leonardo did some of his most marvelous sketches of ugly persons (insert in the photo, above). Ghandi was ugly. Mother Theresa was ugly. Gorillas are ugly —big lovable cuddly creatures who would share their last banana with you. But they're ugly. And so what.