to all Miscellany entries
to bottom of this page

My original entry on Leoncavalo is here. I have this comment from

Luciano Mangiafico, great friend of this website. He writes:

"Toward the end of your entry you write: 'At least one treatment of the life  of Puccini on Italian TV had the two composers engaged in a nasty rivalry. I have no idea if there is any truth to that, but Leoncavallo actually wrote part of the libretto for Puccini’s Manon Lascaut; it is hard to see him doing that for a bitter rival.'

"I looked into that and found that indeed it is true. Eugenio Gara in his Carteggi Pucciniani (Milano,1958) says that in 1889, while under contract to music publisher, Giulio Ricordi, Leoncavallo  was asked to help with the draft of the libretto of Manon Lescaut for Puccini. Several others dabbled at it also: playwright Marco Praga, literary critic Domenico Oliva, Giulio Ricordi, Puccini himself, librettist Luigi Illica, and librettist Giuseppe Giacosa. Even now it is not clear who did what, except that Giacosa polished and edited the final version. At the time Leoncavallo worked on the libretto, he and Puccini were friends. Manon Lescaut premiered in February 1893; they became competitors, as you know, over the issue of La Boheme. Leoncavallo claimed that Puccini had appropriated his idea to write La Boheme from the story by Henry Murger. Puccini's La Boheme premiered in February 1896, while Leoncavallo’s was staged in May 1897. The rest is history."

This entry also appears as a comment below the main entry on Leoncavallo, here.

"A unique find, without precedent in Italy"
--Italian Ministry of Culture

I am a bit tired of hearing about new discoveries in Pompeii. Maybe they should just cover it all up again so we can get some sleep. Yet this one seems to be legitimate, so it's worth a word of two. The "unique find" is a large Roman four- wheeled ceremonial chariot uncovered near a stable in Pompeii. It's in an area around 700 meters north of the walls of ancient Pompeii. Massimo Osanna, the outgoing director of the site, says the carriage is the first of its kind discovered in the area, which has so far yielded functional vehicles used for transport and work, but not for ceremonies. The entire city of Pompeii has an area of 66-hectares (165-acres). They have been digging in a 22-hectare area for years and it has yielded a tlot. It will take them years more to finish and there will be more great discoveries and great press conferences. Whatever comes next will be in the hands of a new director, Gabriel Zuchtriegel, a German, who comes from his position as director of the nearby Paestum archaeological site. One, he is a foreigner; two, he is very young for such a position (39); three, he is very good at what he does. One of those three may be of great help to him.

This link goes to an entry in the Science Portal on this gentleman. 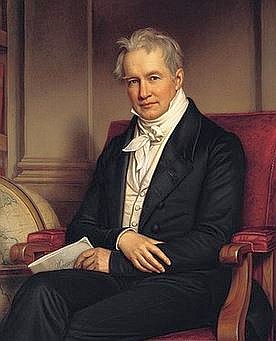 Alexander von Humboldt in Naples and Naples in Volcanology

At least we hope so. Our artists' collective, Opus Continuum, plans on an exhibit this summer from 1 July to 30 September. Selene Salvi tells me they will use the Vanvitellian Lodge in Bacoli. The exhibit is called L'Eros degli Ardenti (Eros of the Passionate -- lit. "inflamed, fiery) and is a tribute to the Campi Flegrei, the Fiery Fields, or, if you will, the "ardent fields", just like the passions that stir us. The "Eros" part is the subtitle of the exhibit; “Noi che tignemmo il mondo di sanguigno”, from Dante's Divine Comedy, the Inferno, in the second circle, Canto V, line 90, where those who gave their entire lives over to the excesses of carnal lust, passion, and desire are punished. The Italian is:

rendered by Longfellow in his 1867 translation as

"O living creature gracious and benignant, / Who visiting goest through the purple air/  ⁠Us, who have stained the world incarnadine, ⁠


Their lust and self-indulgence have condemned them to be buffeted by the winds of a violent storm, drifting endlessly, as they drifted in the winds of their sexual desire. This is where Dante places Cleopatra, Helen of Troy, Achilles, and many others who were overcome by sexual love during their lives. He is good enough to cut me them some  slack, for it was all consensual. No one was forced. They just wanted to make "the beast with two backs," and they did. The verb "tingere" in Italian can mean tinge, dye, color, paint, etc. and suggests bright red, the color of fire, the flames of passion.

Easter is almost here and Gay Odin in Naples, one of Italy's best-known makers of chocolate, is still  doing what it does best --make chocolate. It is combining that with what Italy does best, celebrate the father of the Italian Language, "the Supreme Poet," Dante Alighieri, who died 700 years ago, in 1321. The company has put the finishing touches on a Dante Easter Egg, two meters high and weighing 300 kg. All chocolate.

The complete story is here.

The National Laboratory of Gran Sasso is the largest underground research center in the world. It is beneath Gran Sasso mountain, 120 km from Rome. They research particle physics under the "umbrella" of the National Institute for Nuclear Physics, which coordinates nuclear, particle, theoretical and astroparticle physics in Italy. From 2009-2012, the Research Director of the Gran Sasso lab was Lucia Votano, one of the most prominent researchers in particle physics in Italy (she is now retired). She was the first woman to hold that position after decades at various physics labs throughout Europe.

Her reaction to media coverage of her appointment was two-fold: on the one hand, good. It showed that "...a woman has risen to the top in science"; on the other, "If women were normally allowed to go as far as their ability can take them, this wouldn't have been such a big deal." She is not shy about telling you where she grew up --down south in Calabria in the 1950s, where 30% of the population couldn't read or write and where children were undernourished and sicker than in the north. She was a woman, but all she ever wanted to be was a scientist. So, sure, she was happy, but... next question? She has authored or co-authored about 300 scientific papers in peer-reviewed journals and has  also written popular science books.
added: Sept. 2022 - As of 2020, she is part of the 600 scientists currently working on JUNO, a neutrino experiment under
construction in Southern China, which aims to begin acquiring data in 2021.
In March 2010, she was awarded the Order of Merit of the Italian Republic by the Italian president, Giorgio Napolitano.
In 2019, she became honorary member of the Italian Physical Society.

This article from the New York Times:

Paris Teenager’s New Gig: Would-Be Queen of Italy. A Nation Shrugs.
By Jason Horowitz
published May 9, 2021
"The son of Italy’s last king has tapped his teen granddaughter to eventually lead the House of Savoy, pretenders to Italy’s defunct throne" is at this external link.

The article will change neither your life, nor that of Vittoria, the never-to-be queen of the never-to-be-restored kingdom of Italy (defunct since 1860), but it is very well-researched and written. It is very informative, entertaining (and even hilarious). It gives you insight into the quixotic would-be dynastic goings-on of the Savoys since I last wrote about them a few years ago at this link. After all, it's been a few years, so refresh your now tired memories.

Vittoria di Savoia (shown). Her great-grandfather’s great-grandfather (you figure it out) was Vittorio Emanuele II, who united Italy in 1860. Well, actually Garibaldi united it and gave it to the king.

Forget your Computer. Restart your Life.

"We finally got the date! Friday, July 2. 6 p.m.  The Vanvitellian Lodge. This is it! Restart!"
That is from Selene and she is talking about the Opus Continuum project, Eros (see #4, above, this page.)

We all hope so. There are more than a few signs in Naples and throughout Italy. There were 20-30 sailboats out in the western bay the other late afternoon --1900, the sun was still up but setting, and sails were just lingering, floating in the light and staring at it, full of hope that this year might still be saved. Then they drifted west with the encroaching shadows to put in at Mergellina harbor.

What else has opened? The San Carlo opera opened the other evening and played La Traviata. After months of silence, they did what they were meant to do.They had an opening minute of silence for the victims of the pandemic and then the show went on. There were only 500 people in the audience, spaced apart due to restrictions still in place. The same thing at La Scala in Milan. The show went on.

that entry is at this link

The Next Train? Maybe October. Why, You in a Hurry?
further tales of the Naples Metro


that entry is at this link

Film Music and Nino Rota
at this link

Eros of the Passionate

"We who have stained the world with blood"

from Jul Fri 2 through Sep Sun 5

The Vanvitellian Lodge is on Lake Fusaro (image, right) in Baia just north of the Gulf of Naples, between Monte di Procida and Cuma

Events of the exhibit:

Everything is at 19.00 (7p.m.), at the 'Ostrichina' (this building in front of the Lodge.
It does not look like an ostrich. It means 'little oyster').

18 July: presentation of the catalog, "We Who Have Stained the World with Blood".

22 July
“The Faces of the Artistic Nude, Between Painting and Photography”
led by prof. Fausto Minervini (Academy of Fine Arts of Bologne).

12 August
"Graphic representation of sexuality in the human psyche, from ancient times to the present"
led by Dr. Domenico Nardiello, psychologist.


The exhibit is open on weekends until 2200. Entrance is free. If you want a tour of the Vanvitellian
Lodge on a weekday, you have to book in advance for your group. Minimum of 10 persons.
Entrance fee €4.